Elton John is one of the biggest stars in the music industry, and has been for decades.

He’s best known for such hits as Candle in the Wind, Your Song, Rocket Man, Tiny Dancer, Daniel, Step into Christmas, Don’t Let the Sun Go Down on Me, Sacrifice — the list goes on and on.

And let’s not forget his CBE, his Academy Awards, his Grammy Awards, his charity work, or Rocketman, the recent movie based on his fascinating life and career.

The man is, quite simply, a living legend.

As a hit-making powerhouse, Elton John has received widespread attention for reasons beyond his musical skills or philanthropy. Including his hair loss.

This has been a common point of discussion in the media, as John has been photographed with a wide variety of looks since he shot to fame.

But it’s well-known that he has been affected by baldness for many years.

When did this start? And what’s the truth behind the Elton John hair transplant stories online?

While Elton John experienced an earlier onset, as a teenager he didn’t have hair loss problems. Photos of the young Elton John show him with naturally thick, healthy locks.

At the age of 22, he still had great density. In the photo below from 1969, he was sporting a shaggy mane: 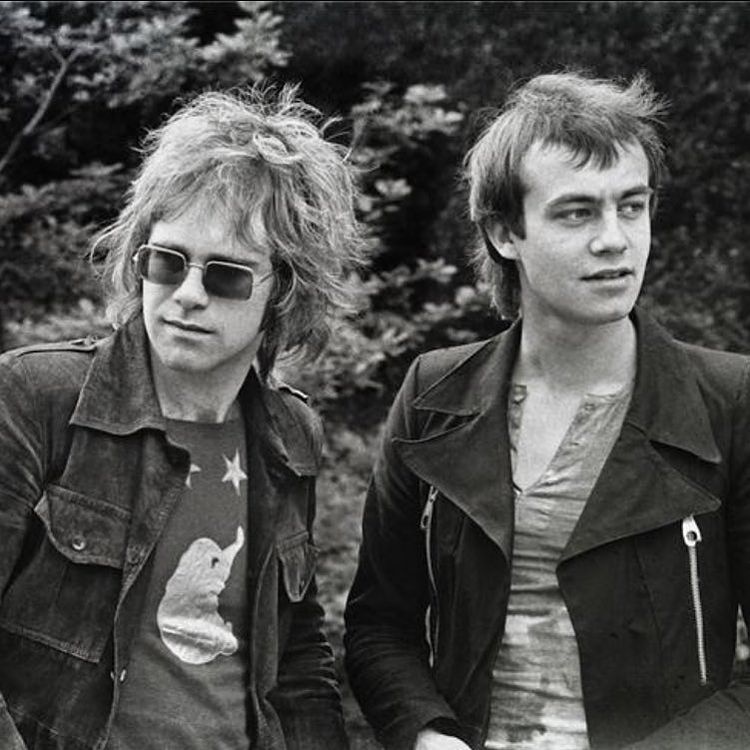 When did Elton John start to experience hair loss?

Elton John has said he started to lose his hair in the early 1970s, and that his baldness was quite severe by the time he hit 30.

This is a young age for any man or woman to experience hair loss, and it can be a challenging process, even for individuals with a relaxed approach to their appearance.

But it must be even more difficult for someone in the public eye. The media can be cruel in their coverage, but even if that’s not the case, seeing images of your own receding hairline or bald scalp on newspapers and websites must be hard.

And he’s had plenty of time to get comfortable with his hair difficulties, as it seems his locks started to shed from his 20s onwards.

Photographs from the late ‘70s show that his hairline has receded significantly, though he still had healthy growth around the back and sides (as countless men do even when they go completely bald on top).

This is important for anyone considering a hair transplant: healthy follicles will be removed from these areas before being implanted into thinning or bald zones on the scalp. 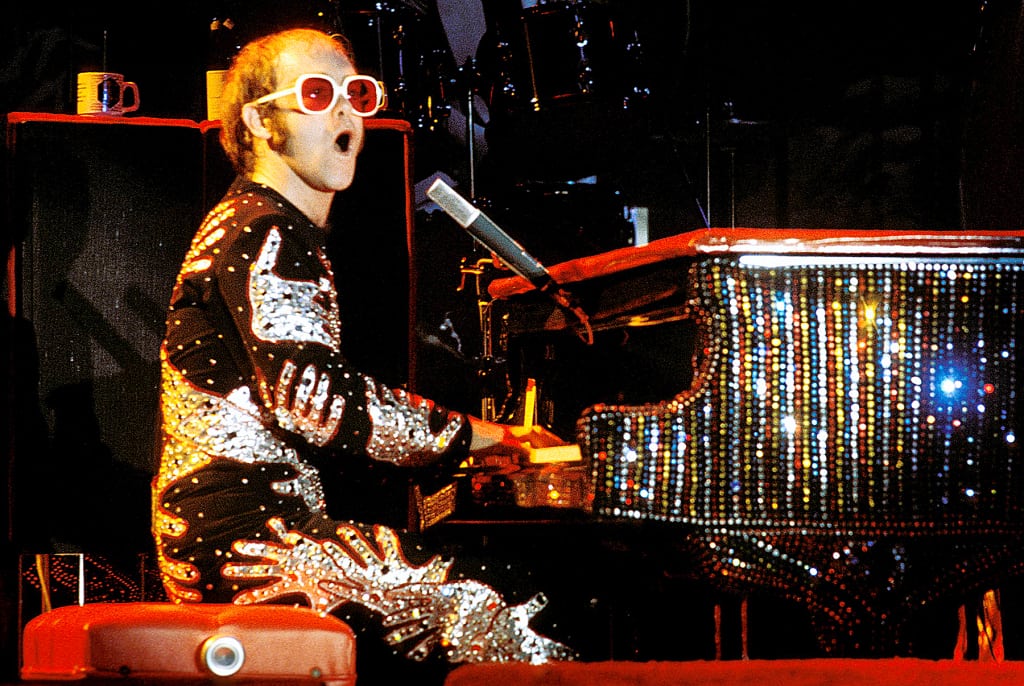 John’s hair loss continued to get worse throughout the ‘80s, and many images show that he started to experiment with hats during that decade.

Take a look at the photograph below, taken during the iconic Live Aid fundraising concert in 1985: John is sporting a somewhat exotic piece of headwear here. And he looks fantastic — he’s always been capable of looking stylish in flamboyant or eccentric outfits.

Why did Elton John suffer from increased hair loss?

Elton John has blamed a number of causes for his hair loss.

One is drugs and alcohol, with the latter believed to disrupt hair growth due to its effect on zinc absorption and thyroid problems.

And this, in turn, may leave addicts malnourished and without the nutrition they need for healthy hair growth. Protein, in particular, is a vital part of the body’s natural hair growth cycle, as this is what follicles are primarily made of. Too little can trigger hair loss over time.

In 1978, John also claimed that “messing around” with his hair, such as dying it multiple vibrant colours, could have contributed to his hair loss.

It’s also possible that a family history of hair loss, such as male pattern baldness, could have caused John’s shedding.

What kind of hair treatment did Elton John have at first?

Elton John first opted for a hair transplant in the ‘70s. He had two sessions carried out almost back to back. In his autobiography, he revealed that both hair treatments were performed with the strip (or FUT) technique.

Unfortunately, both procedures were unpleasant for John. He has discussed, with admirable frankness, the sheer discomfort he experienced during and after his hair transplants.

Was the first treatment successful?

Sadly, both of the Elton John hair transplants failed.

There are some crucial factors to consider here. First and foremost, hair transplants so long ago were incredibly basic compared to today’s innovative solutions.

The technology available to surgeons then would have made transplanting hair follicles precisely, without damaging them, much more difficult than it is now.

John has said that he wore a hat straight after his first hair transplant, despite being explicitly told not to, which he also believes may have affected the quality of the results.

It’s possible that this interfered with the hair’s regrowth.

Again, though, the problem may lie in genetics. People experiencing male pattern baldness often have the AR (Androgen Receptor) gene in the “X” chromosome (inherited from the mother), which can double the risk of developing the condition.

It’s generally recommended that patients with male pattern baldness wait until the hairline has receded as far as it’s going to before undergoing a transplant.

Otherwise, the shedding could continue and further treatment will be required to restore growth effectively across the scalp.

Professional aftercare following the transplant is vital to identify any potential problems as early as possible, and to answer any questions that may arise about the recovery.

But he was clearly unhappy with the outcome of his treatments, and has accepted that hairpieces are the ideal option for him. 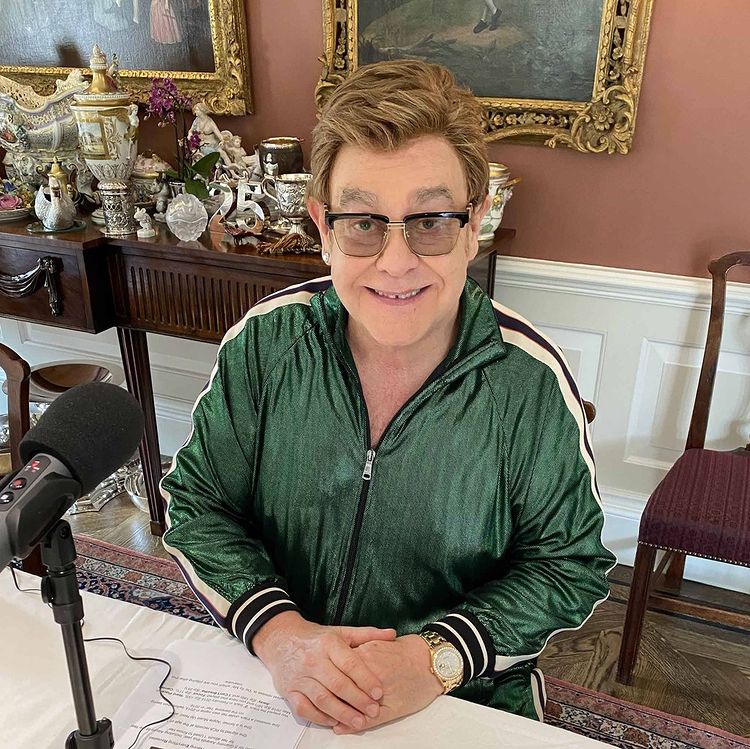 Was Elton John using wigs for a while?

Elton John started to put hats aside and embrace wigs more regularly during the 1990s.

Recalling his first wig, he said:

„I remember the review when I came out for the Freddie Mercury concert at Wembley. It said I came out with a dead squirrel on my head.”

But over the years, his hairpieces came a long way in quality too, helping him achieve looks that he is happy with.

The image below is from 1997, the year in which he re-released Candle in the Wind for the late Princess Diana.

It shows John wearing a convincing wig, and he appears much more youthful than he did with his receding hairline years earlier.

What other hair treatments did Elton John try?

It appears that John only tried two hair transplants but no other forms of treatment, such as topical applications or common products such as minoxidil.

However, while minoxidil may cultivate regrowth for some patients, it’s far from guaranteed and the results are only temporary.

As soon as you stop using the treatment, hair loss is highly likely to resume. This requires a lifelong commitment to both the medication and the cost involved.

Elton Johns first hair transplant was painful and not at all successful. However, the technology has moved on substantially since.

Surgeons take great care to ensure patients remain comfortable and relaxed during procedures — they may even allow you to watch a movie or listen to music to keep you entertained.

Modern hair transplants are, for the overwhelming majority of patients, the most effective way to restore hair.

There are two options to choose from:

During FUT procedures, surgeons cut a strip of flesh from the back of the patient’s head and slice it into tiny pieces to harvest the healthy follicles.

These are then implanted into incisions in the scalp.

As a result of FUT’s invasive nature, it causes visible scarring on the back of the head.

This can reduce the level of freedom that patients have to experiment with hair cuts and styles in the future. Particularly if they want to keep their hair transplant surgery discreet.

FUE is a more popular option than FUT today.

That’s because it’s a minimally invasive treatment that leaves no visible scars on the back of the head, providing patients with the flexibility they need to try any hairstyle they like over time.

At HairPalace, our surgeons use the state-of-the-art FUE2 Safe System to transplant hair in a safe, painless, effective way.

A handheld micro punch tool extracts follicles with unparalleled precision, and makes transplanting them into balding areas more efficient. There’s almost no danger of harming grafts, and 95 – 100% of implanted hairs grow back.