THINGS TO DO IN ISTANBUL

The Maiden’s Tower, which inspired films and poems with its beauty, is one of the most beautiful buildings of Istanbul. Moving historical and unique landscape, the name of the kind of legends derived from the kind of tower at least Topkapi Palace, makes the Blue Mosque as interesting.

The tower, built on a small island, is about 18 meters high. The building, which consists of 5 floors, is the last Byzantine structure in Üsküdar District. The tower was named after Damalis, the wife of King Chares of Athens in ancient times. The tower, which was inspired by legend, was called kule Tower of Leandros Biz, was called ’Arcla“ during the Byzantine period. Those who gave the name to the historical building today are the Ottomans.

It was built by the Athenian Alkibiades in order to control the traffic in the Bosphorus and take taxes from them. The building, which became an important control point thanks to the chain pulled from Sarayburnu Beach, was built in 341 BC by Chares, a sarcophagus for his wife.

Legend of the Maiden’s Tower

Although it is in the middle of a big city like Istanbul, the fact that people cannot be easily reached, has caused the emergence of many legends in which the structure has played a role in time.

The best-known story derived from the tower is about the emperor’s daughter. According to the story, the Byzantine emperor had a daughter. The happiness of the emperor who announced the birthday of the princess to the birth was not very long. Because the oldest of the scholars, the mighty ruler said that his daughter would be bitten by a snake before he turned 18 and would die. Then the emperor repaired the structure in the middle of the sea and placed his daughter in the tower. However, the princess, who lived in a safe environment for a while, could not escape the fate and was bitten by a snake who came to the island in a fruit basket.

You can visit the historical building, which operates both as a museum and a restaurant, 365 days a year between 09.00-19.00.

How to get there?

You can reach the tower from Salacak or Kabataş by boats. 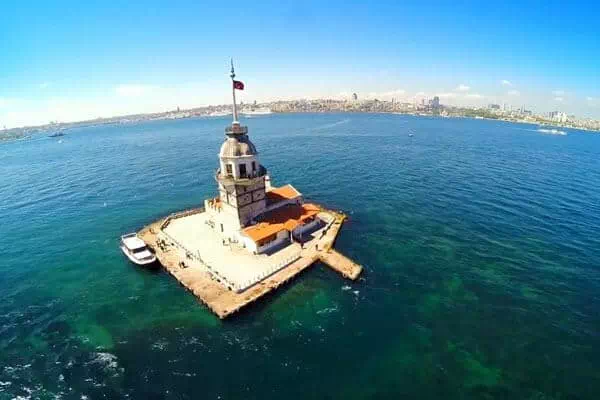